The Route 22 and Route 33 corridors carry the highest traffic volumes in the region. Route 22 is classified as a freeway/expressway. The Route 33 corridor is classified as a freeway/expressway south of Route 248 and as a principal arterial north of Route 248. Both of these corridors have a primary function to move traffic. Other corridors such as Route 512, Route 191, Route 946 and Route 248 carry moderate volumes in comparison.

This map shows crashes, fatalities and injuries between 2013 and 2017. The highest number of crashes occurred
in and around the boroughs of Bath, Nazareth and Stockertown, and along the most heavily traveled roads such as Route 22, Route 33 and Route 191.

The Nazareth Area has experienced increased traffic and quality of life impacts from development in adjoining municipalities, both within and outside the study area. The Route 33 corridor is experiencing accelerated traffic growth. Many of the critical roads in the community are owned by Pennsylvania and are not under local control.

The Nazareth Area will need to examine current and anticipated transportation, travel, recreational and infrastructure needs to balance maintenance and investment to achieve a resilient system.

A Transportation Analysis was performed to examine current transportation infrastructure and operational conditions. Data was gathered on the existing transportation network, average daily traffic and crash patterns. The analysis consisted of comparing concerns identified by the community to the available data to identify other issues in the region.

The Nazareth Area municipalities were asked to identify the three largest transportation issues within their community. These locally identified issues were compared to crash report data, traffic volumes and congestion, and bridge status data collected by the LVPC, PennDOT and other agencies. The results show a strong correlation between local perceptions of transportation issues and available data, enabling the Nazareth Area municipalities to have a better understanding of these transportation impacts. The findings are broken out by municipality below. 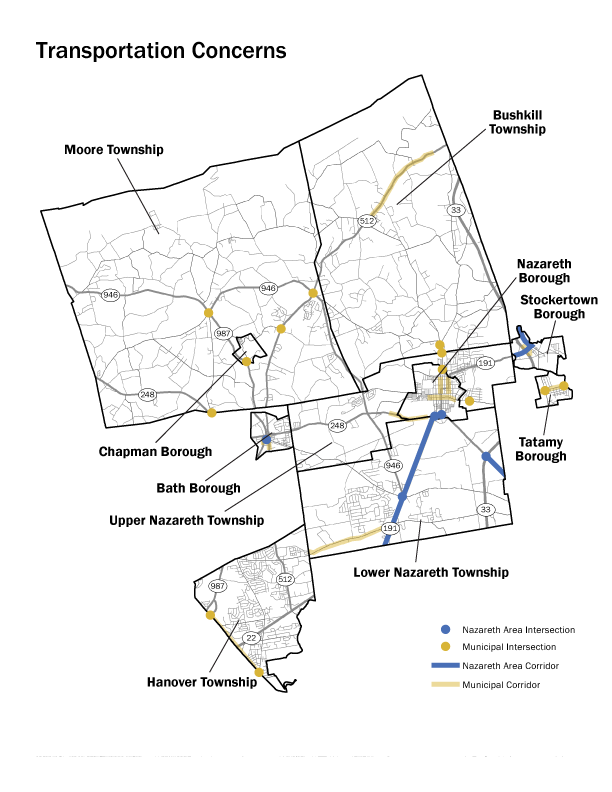 Bath Borough identified both the Route 512 and Route 329 corridors as having significant truck traffic, and traffic data shows truck-related congestion within these corridors, with an average annual count of 946 trucks per day. The high volume of truck traffic, combined with high volumes of total daily traffic and multiple points of vehicular movement conflicts, have resulted in high to medium crashes in this corridor from 2013 through 2017.

The Union Street and West Main Street intersection was identified as lacking traffic signals and lacking signal synchronization with other intersections. Traffic data shows high daily traffic volumes and congestion, with an average of 957 trucks per day. Stop lights should be synchronized to avoid crashes. A medium number of crashes occurred at this intersection.

The Route 512 corridor south towards Jacksonville Road was identified as having parking deficiencies. Transportation data indicates an average count of 1,027 trucks traveling through the corridor per day along with a high total traffic volume of 19,936. A high number of crashes occurred along this corridor. LANTA does not provide public bus service to the Borough.

Bushkill Township identified one intersection, one corridor and one interchange as areas of general traffic concern. The Bushkill Center Road/Jacobsburg Road intersection carries moderate total traffic volumes of 5,396 vehicles per day, including 197 trucks. The intersection is not identified as congested and has a low number of crashes.

Route 512, between Fox Ridge Road to Bushkill Center Road, is identified as a congested corridor. The entire corridor within the Township is projected to be congested in 2040. The Route 512 corridor through the Township experiences fluctuating traffic volumes dependent upon location. The highest volumes recorded were 10,315 total vehicles per day, including 935 trucks, near the Route 33 interchange. The corridor experiences a moderate amount of crashes.

Chapman Borough identified truck traffic concerns on Main Street and Monocacy Drive (Route 987). Traffic data in this area shows the average number of trucks per day is 184, and daily traffic volumes in this intersection are low.

The Schoenersville Road corridor carries high traffic volumes of 28,012 vehicles a day, 1,348 of which are trucks. The corridor experiences congestion, as it is identified as a current and future congested corridor. A moderate amount of crashes occur along the corridor.

The entire Route 191 corridor from Nazareth Borough to Bethlehem Township, and the Route 191/Newburg Road intersection in particular, was identified as an area of concern. The corridor carries high traffic volumes of 15,109 total vehicles per day, 1,108 of which are trucks. A portion of the corridor from Route 22 to Route 946 is currently congested. In 2040, the length of congestion along this corridor increases northward to Hollo Road. A moderate level of crashes occur along the corridor, with the greatest concentration at the Route 191/Newburg Road intersection.

The Route 248 corridor was identified as another area of concern. The corridor from Nazareth Borough east to the Palmer Township boundary experiences moderate traffic volumes of 11,112 vehicles per day, 928 of which are trucks. This corridor from Route 191 to Hollo Road is currently identified as congested. In 2040, the length of congestion along this corridor increases eastward to Route 33. While the corridor as a whole experiences low crashes, a moderate level of crashes occur at the Route 248/Route 33 interchange and at the Route 248/Prologis Parkway intersection.

The Route 248 corridor, particularly at the intersections of Airport Road and Grouse Road, were identified as an area of concern. This section of corridor carries a total of 12,281 daily vehicles, 1,228 of which are trucks. The corridor is not identified as congested. However, it is projected to be congested in 2040 between Grouse Drive and Washington Street (south of Moore Township). Few crashes occur in the corridor.

The Route 987 and Route 946 intersection (Klecknersville) was identified as an area of traffic concern. The average daily traffic count was moderate at 6,180 total vehicles, including 371 trucks. Neither corridor is identified as congested. Few crashes occurred at the intersection.

Stockertown Borough reported general traffic concerns at the Sullivan Trail and Route 191 intersection. Traffic volumes are moderate at 9,594 vehicles per day, 764 of which are trucks. A moderate amount of crashes occur at the intersection. The intersection is part of a corridor identified as congested in 2040.

The main traffic concerns reported were associated with the South 8th Street/Main Street intersection and the intersection at Main Street and Bushkill Street. These intersections have a high average daily traffic count of 17,386, including 3,109 trucks. Despite the high traffic volumes, crash numbers are low.

Upper Nazareth Township identified three intersections of traffic concern. The first is the West Beil Avenue and North Broad Street intersection, which gets 5,396 vehicles per day, including 331 trucks. Neither road is identified as congested. The intersection experiences few crashes.

Municipalities were also asked to identify their three highest priority transportation issues within the Nazareth Area. Together, the municipalities identified 12 regional issues—most of which aligned with issues identified locally by their respective municipalities. These rankings were combined to create a regional ranking of the concerns.

Regional issues identified in the charrettes and community survey are backed up by much of the data collected by the LVPC, PennDOT and other agencies.

2. Route 33 & Nazareth Road Interchange: This interchange experiences high traffic volumes of 18,369 vehicles, which includes more than 2,000 trucks. The high rate of crashes supports community perceptions. The interchange is projected to be congested in 2040.

4. Beth-Bath Pike & Nor-Bath Boulevard: The Beth-Bath Pike and Nor-Bath Boulevard was identified as the #4 priority location. The area has moderate traffic volumes exceeding 11,000 vehicles per day. It is a location projected to be congested in 2040 and currently experiences a moderate to high amount of crashes, which supports community perceptions.

5. Priority Corridors/Intersections: Several corridors and intersections tied for the #5 priority in the region based upon community voting. They include Route 22, Yost Road/Bauer Road/Route 512, the Route 191 corridor between Bethlehem Township and Nazareth Borough, Route 191 through the Borough of Stockertown, and Uhler Road in Tatamy Borough and Forks Township. Traffic volumes along these roads vary significantly between 9,000 and 90,000 plus vehicles (Route 22 outside the study area). Several of those corridors are either currently congested or anticipated to be congested in 2040. This supports the general community concerns regarding traffic in the region.

8. Tatamy’s Main Street: Development impact and an overall increase in traffic along Main Street and at the interchange has made it a key area of concern. Traffic exceeds 17,000 vehicles per day, including more than 3,000 trucks. This supports community perceptions regarding the impacts of development on the road network. Crashes along Main Street are few.

Transportation infrastructure is aging in the Nazareth Area communities. At the same time, the area is experiencing increased impacts from heavy truck traffic associated with both existing businesses and business growth. Municipalities without new development are experiencing traffic impacts resulting from development in adjacent regions. Sidewalk infrastructure is concentrated in the boroughs and exists in lesser amounts in the townships. Multi-use trails serve recreational and possibly some commuter needs within the region, but there is a municipal desire to expand the network and connect more areas of the Nazareth Area communities. Public bus transportation services exist to a limited extent in the southern and eastern municipalities. Investments to enhancing the mixed-transportation infrastructure in the region will not only improve resident mobility and safety, but the quality of life as well.