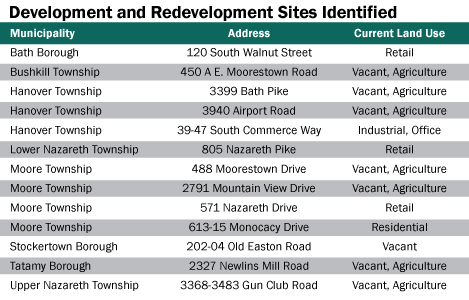 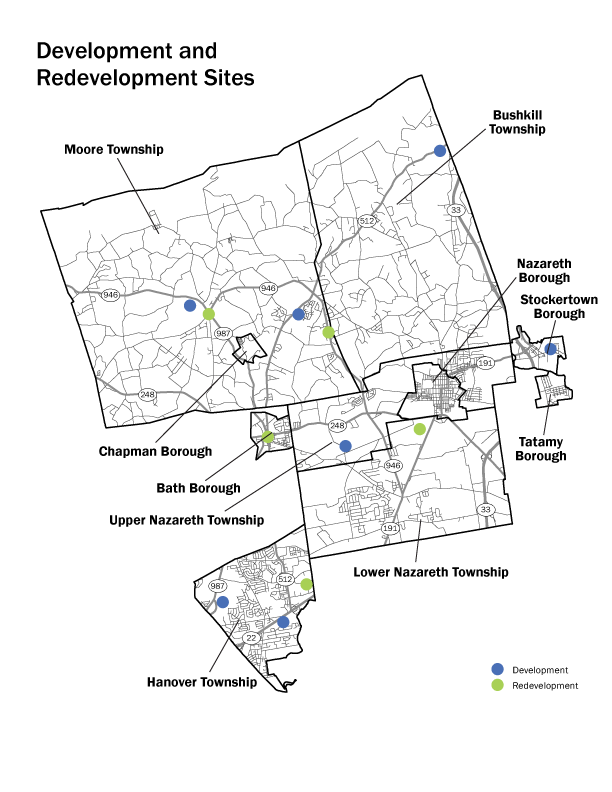 Twelve sites in the Nazareth Area were identified by the Steering Committee as having priority for development, or redevelopment if previously developed.

A development and redevelopment analysis could project the municipal, school district and Northampton County costs and revenues of developing the site at a higher intensity of use. It involves calculating the municipal costs and revenues to determine the best estimate of how much the land in question is worth under different levels of development. Cost information can be estimated by various land uses based on municipal, county and school district budgets. The data available to evaluate revenue for this analysis includes assessed land value, municipal tax rate, school district tax rate, county tax rate and acreage of land uses within each municipality. Revenue information can be based on municipal and school district millage rates.

This analysis is typically based on multiple scenarios according to the interests and needs of the community. Four example scenarios are discussed below.

The Existing Scenario models the costs and revenues currently generated by the property. This scenario serves as a baseline for comparing the other scenarios.

The Average Scenario models what the tax costs and revenues would be if the site is assumed to have the same value as the average per-acre value for that type of land use within the municipality. This revenue is compared to the average cost for that given land use type in that municipality. This portion of the analysis helps us understand whether or not the property is currently underperforming, on par with or overperforming compared to similar properties within the municipality.

The High Scenario models what the tax costs and revenues would be if the site is assumed to have a similar value to high value properties that already exist within the municipality. The data needs to be examined to determine an appropriate value for the assumption. Maximum value per acre will likely not be used because it is unlikely that the properties being tested would have the highest assessed value in the municipality if developed.

The Case Study Scenario serves as a comparison to the High Scenario to determine what cost and revenue a property may have if improved. This model could use recently completed similar projects in Northampton County that have been assessed to have similar development and redevelopment projects desired by the Nazareth Area communities.

These four scenarios help to provide an understanding of the financial impacts of different intensities of development, without having a specific development proposal to test.

A development and redevelopment analysis can be a useful tool to determine the area’s strengths, however, it is complex and will require community collaboration in reviewing municipal, county and school district budgets to create viable estimated costs versus revenue impacts. Further discussions need to be accomplished with the Nazareth Area municipalities to determine specific properties for which this analysis would be valuable and to ensure proper interpretation of municipal budgets. These discussions will be accomplished over the next several months such that the analysis can be completed in a timely manner for consideration in the multi-municipal comprehensive plan.